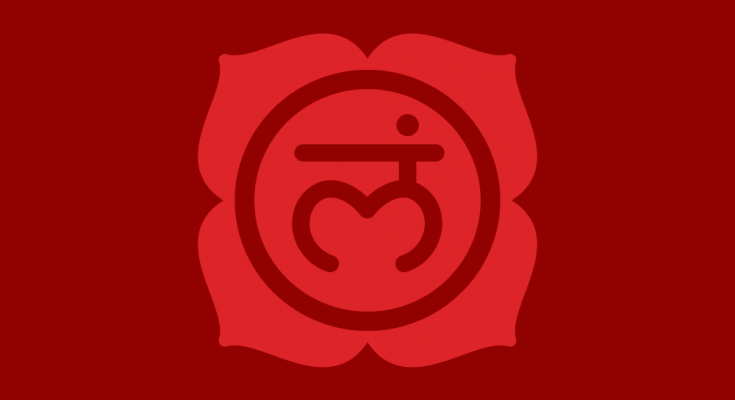 The root chakra is the first chakra located on the pelvic floor which is responsible for helping you feel secure, grounded and safe. This is primarily done by the quality, polarity and flow of energy being experienced within this chakra. If your base chakra is out of balance or blocked it will affect you in a number of detrimental ways. It can lead to chronic anxiety, insecurity, uncertainty and if this chakra becomes blocked, closed or partially closed causing your grounding cord to become thinned or cut off which will make you feel anxious as your natural flow of spiritual energy impeded. 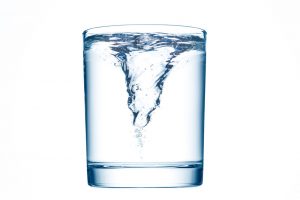 The root chakra can be a real sore spot if you don’t take care of your sources of fear and anxiety including your survival needs, which includes your physical safety and well being, taking care of the body through exercise and diet, social inclusion and the need for being part of a group or community, the quality of your work and career responsibilities and ensuring that you effectively balance a range of work, social, relationship, alone and family time.

This chakra or energy centre is seated within the pelvic floor pointing downwards towards the ground, positioned between the perineum and anus in men and similarly close to the vagina in women, it’s most sensitive as it’s the narrowest point of the vortex which is ordinarily protected by four petals that usually need to remain open in order to maintain our inner body security and be free from creating anxious energy and closing the chakra down.

In order to keep the root chakra clean, you need to keep your energy clean, with means purity of your thoughts, attitude, intentions, sexual practice and making efforts to address your fears and anxieties.  You may also use bathing practices and keep a clean inner body through regular meditation, vibrational raising practises and meditations and shadow work in order to heal individual issues.

The root chakra flow is located in a very sensitive area of the body and when negative energy is being removed it will feel quite sore, uncomfortable, painful or even burn for a period of time during the extraction or removal. My advice is to put up with the discomfort the best you can and concentrate on relaxing in order to clear and release as much of the negative energy and dark energy blockage as possible. Oversensitivity due to close proximity to the genitals when clearing dark energy shouldn’t be mistaken as healthy sexual arousal as the energy is impure and damaging to the spiritual anatomy.

If you feel burning in this area of the body then it is a sure sign of healing crisis symptoms and that something is being cleared. There is also the possibility that it is blocked when you start to fidget, get uncomfortable, burn or begin to pace about or that it’s simply in need of balancing and opening in order to alleviate anxiety symptoms.

Often during a healing crisis, negative energy may express itself in other ways such as scary vivid dreams or nightmares, if issues associated with this chakra have been created due to creating unclean or intrusive thoughts during the day, it will often bleed out the negative energy during the night, and one may see dirty or toxic symbolic dreams involving dirty toilets or sinks as symbolic imagery.

At times physical symptoms such as eczema, hives breakouts, psoriasis or skin blisters may become physically manifest and these will usually heal themselves given the time to do so as long as you don’t pick, scratch or make them bleed.

During a spiritual healing crisis, this chakra can easily become blocked due to processing negative energy out of the body, which we all do from time to time after a fight, strong argument or disagreement. There are however times when incredibly dense-negative energies are removed from the body as is the case during addiction recovery to drugs, sex and alcohol. A blocked root chakra for any length of time will almost always result in an unpleasant healing crisis which includes the symptoms of a burning sensation in the pelvic floor that if left untreated will gradually get worse. However, it will eventually disappear if you practise a range of spiritual cleansing practices and chakra balancing.

To heal and clear a blocked root chakra, begin by placing a piece of black tourmaline mineral stone, within close proximity to the root chakra so that it sits within the vortex stream, the picture of the vortex spiral in the glass of water will give you an idea of what a chakra energetic vortex actually looks like, however, most people cannot see them without clairvoyant or psychic-perception. 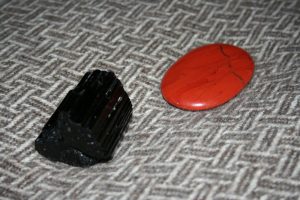 Black tourmaline is one of the best stones for absorbing negative spiritual energies such as those which cause blockages in the root chakra. The tourmaline pyramids are particularly effective at clearing chakras when used over the vortex to direct the energy out at its apex at the top.

Red Jasper is effective for balancing and opening this chakra and I recommend purchasing one of the smooth and flat palm stones as they can be placed under your tailbone whilst you sleep or lay in bed. When a blockage is removed it is frequently followed by a surge of negative energy escaping from the body which will likely cause a range of healing crisis symptoms depending on what needs to be removed which may include burning as dirty energy passes through the narrowest centre of the vortex which is also often accompanied by a significantly increased rate of spin that will continue for the duration until the worst of the negative energy is removed.

During intense periods of strong spiritual energy or spiritual cleansing when this chakra is blocked it will still be necessary to do the grounding roots visualisation and practise barefoot walking on the earth combined with the yoga stretches and spiritual bathing in order to effectively clear and release any blockages and negative energies.

Black tourmaline and Red Jasper crystal, mineral or gemstone can be purchased from a range of specialist crystal shops and online stores, including Amazon and eBay.

One additional tip is if you make a sincere prayer for help prior to placing down the tourmaline stone then you may be able to attract a higher spirit guide who can assist you to speed up the removal process. Otherwise, just sit patiently with the tourmaline stone positioned at the pelvic floor until the blockage has had time to clear, which may take some time depending on the amount and severity of negative energy needing to be cleared, so you may need to be patient during this. 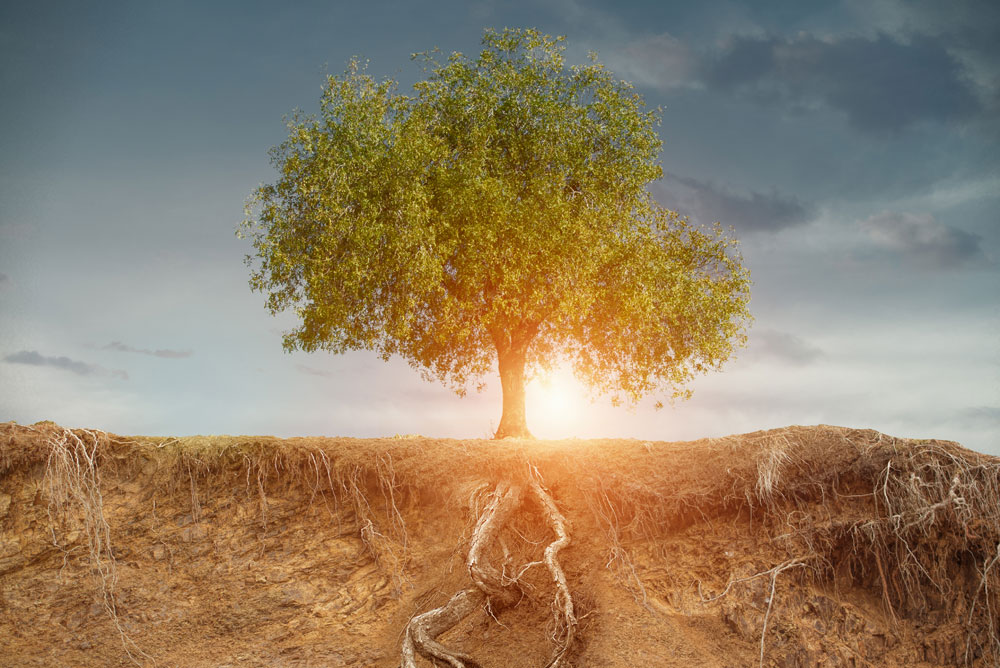 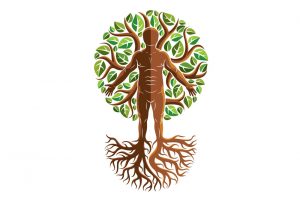 When your root chakra becomes blocked your energy will become ungrounded, for a temporary period of time you can both ground your energy and also redirect and suck a wide range of different negative energies down through the legs and out of the feet.

This can be done by visualising in your mind’s eye using the imagination or psychic-visualisation a strong root system coming out of your feet and burrowing deep down into the ground below, ideally you should see it passing through different layers of earth, rock and sediment in order to build a strong intention. Do your best to make the intention and picture clear and detailed in your visualisation, almost as if you are seeing a video playing in your mind and the roots spreading out and digging deeper like a tree.

Eventually, your symptoms will begin to disappear and you’ll begin to feel more comfortable as things return to normal. In order for the visualisation to be effective, you will need to do this whilst being very deliberate and intentional, seeing in your mind the roots sinking into the ground. It can also help you to get into this mindset by also standing outside when you do this. However, if you live in a flat or an apartment this can also be done on higher floors, in reality, your energy is grounding through one of the lower chakras likely positioned below the feet whilst also potentially being attended to by higher spirit guides.

You do also have chakras in the base of each foot, however, they can also become blocked. In the case of very strong energies, as is with Kundalini, the energy will usually bleed out behind the toes and excess energy can be grounded by walking barefoot on the earth either in a garden or out in your favourite nature spot.

After the main blockage is released it is a good idea to run yourself a comfortably hot bath that includes several handfuls of sea salt or Epsom salts in order to absorb the negative energy from the water. Soak and cover yourself for at least 30 minutes to lessen the severity of any further healing crisis symptoms and to clear any residual negative emotional energy from your aura, ideally wash and cleanse your whole body including your hair.

The warm bath water combined with any scented aromatherapy oils will also sooth and loosen any tight muscles in your pelvic floor, which often become contracted during instances of severe and chronic anxiety which will also cause this chakra to become closed and your energy ungrounded. This ungrounding effect and muscle tightening is one of the reasons we often cross our legs when we feel nervous or anxious, it’s also one of the main reasons why doing yoga is a positive exercise to do as it opens and loosens the pelvic floor muscles which will help to alleviate symptoms of anxiety and muscular tension which is stored here.

During a manic-episode Earth, energy may be sent from one of the lower off body chakras into the body and this was something that I’ve experienced a number of times in the instances of negative energy contamination due to spiritual possession and anxiety/panic attacks. 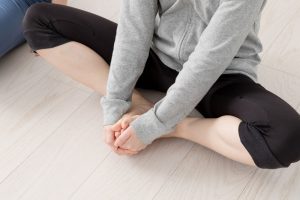 Yoga is an effective way of working with the chakras, body and energy. The following two illustrated positions are the ones which I find to be most effective for clearing.

As we breathe deep and begin to relax the muscles in the pelvic floor and relax and surrender into the pose the muscles will begin to untighten and may in time eventually succeed in opening one of the valves associated with the root chakra. When this valve is opened it will release unpleasant negative energy out into the ambient space of the room, which may require some space clearing in order to remove. During this process, the mind may produce thoughts that come up in order to be released that correspond to our fears and anxieties.

The following video demonstrates a key position to use in order to clear out the root chakra of negative energies, but for more serious bad energies you may need to practise Kundalini yoga or seek out a skilled tantric energy healer. 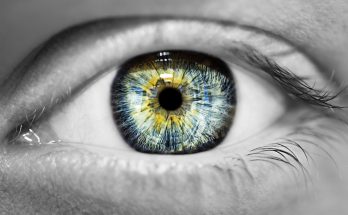 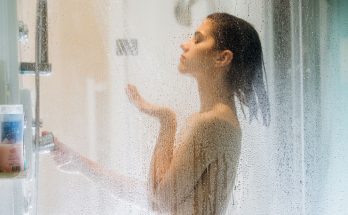 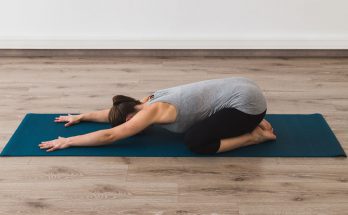